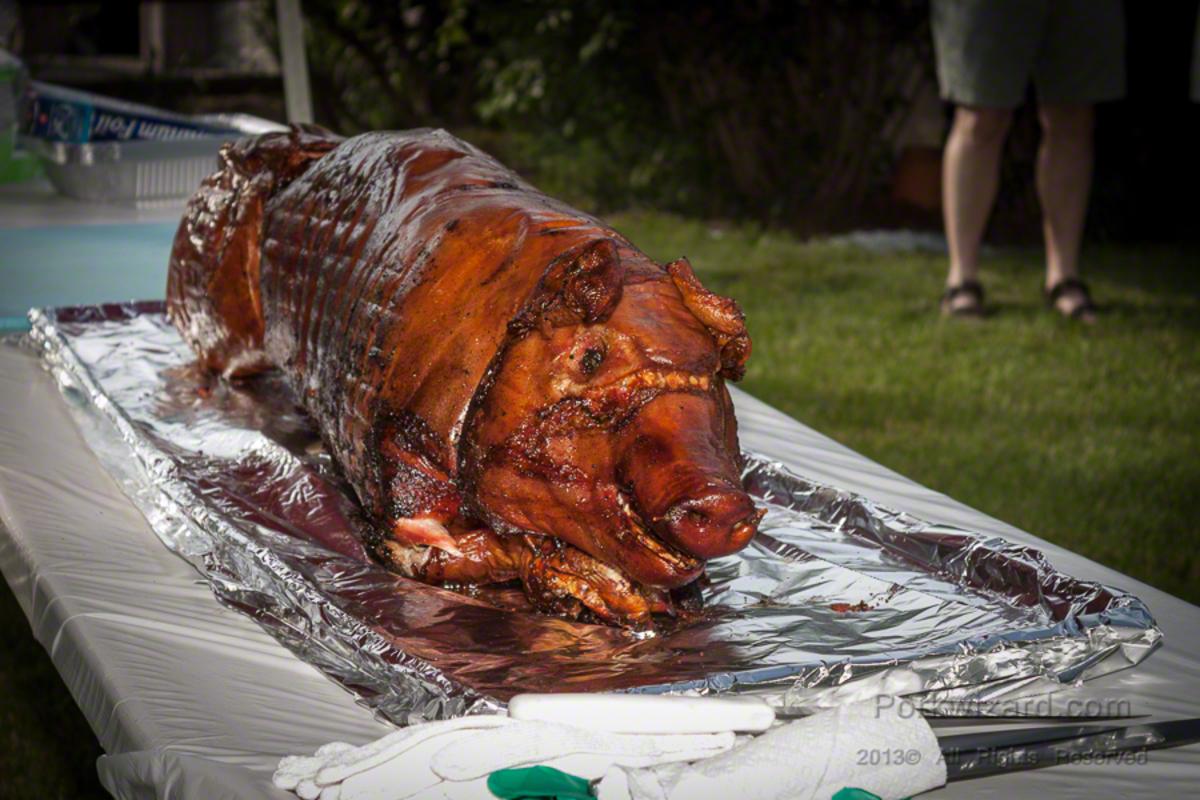 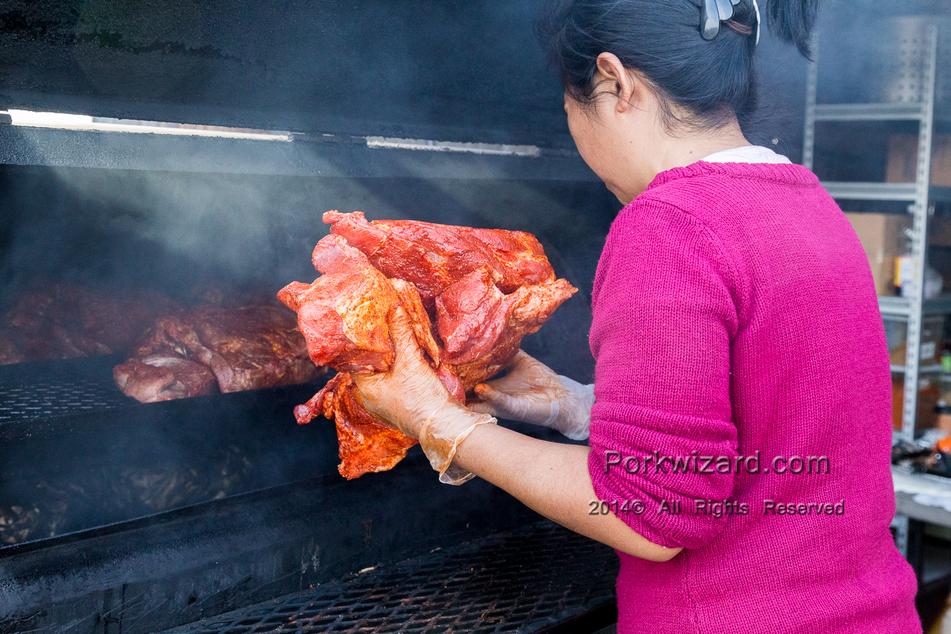 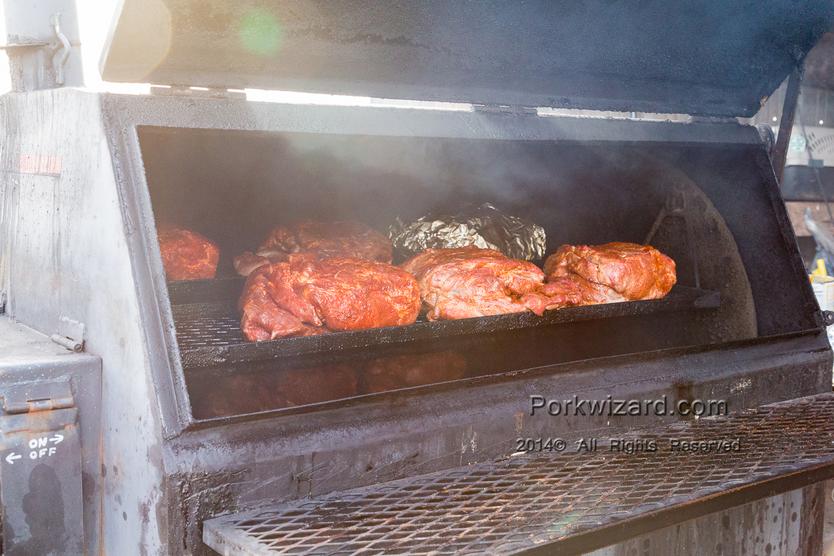 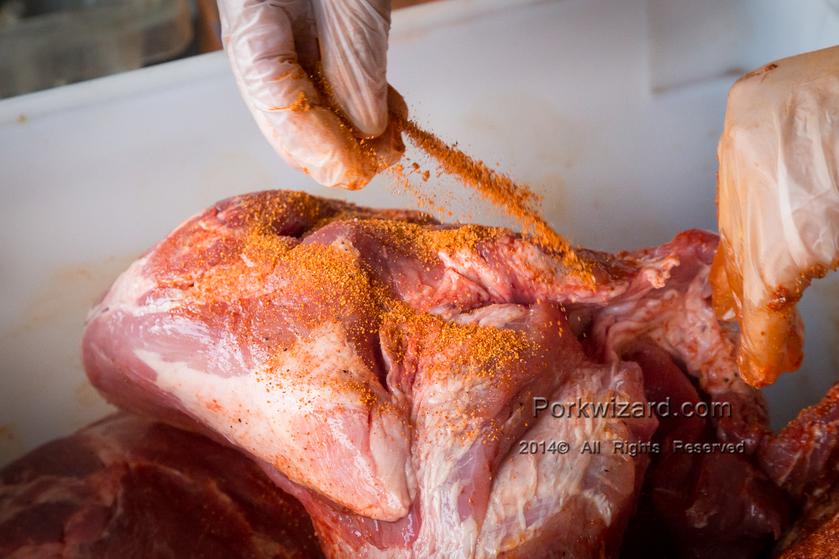 What is "barbeque"? Simply put bbq is meat cooked over wood. Not propane.

Why does bbq taste so good? I personally believe it is because man has been cooking this way for thousands of years. It is kind of "built into out taste buds. But not everyone likes smoke flavor. And all I have to say is "humans are not perfect, and we will have defects. Poor souls."

Is a roasted pig bbq? Yes my pigs are cooked over hardwood charcoal. But they are not smoked. True bbq is smoked or smoke cooked. The pig skin keeps the meat from becoming smoked, so the end result is roasted meat.

What is Smoked? When I say "smoked" I am usually referring to the cooking of ribs, wings, brisket, chicken and other meat. Meat that I have slow cooked in smoker using raw fire wood and or hardwood charcoal. It is cooked low and slow about 225-275 degrees for many hours. Cooking away fat, cooking in flavor of the wood and spices. Smoking can be a little messier than propane but the flavor result in the end is well worth it.

What is hardwood charcoal? Hardwood charcoal is just that, it is burnt hardwood. Not those little square biscuits that most people call charcoal. Hardwood is cleaner, hotter and no chemicals at all. The square stuff? I couldn't imagine what is in that. My hardwood is made from South American eucalyptus trees that are grown for this purpose. When not available I will use other brands of hardwood charcoal such as "Cowboy" brand or "Royal Oak."

What is a bbq pit? A pit is any in-closed unit that is used to smoke cook meat. It could be a hole in the ground or a high dollar commercial unit that holds 100s of pounds of meat. I have seen pits made from old refrigerators, bricks and even and old out house. I believe the oldest bbq pit in the world that is still in use can be found in China. Made of stone, it dates back over a thousand years.

What is a "spit"? A spit is a long rod or pole that is put through the pig or chickens or other meat to suspend it over the fire while cooking.

What is "Open Pit BBQ"? Open pit bbq is meat cooked over a hardwood fire or coals for many hours; again the "low & slow" method is used. However keep in mind some, (not all) places will call there meat "open pit bbq," but if cooked too fast at a temp higher than 275 degrees it in my opinion is not bbq. Smoking meat higher than 275 does not let the wood taste into the meat but rather just puts the taste on the outside of the meat. Taste on the outside is good but too much can cause a very bitter taste.

Why do your ribs and other meat taste so good? Please, I am not bragging but let me first say that just because the sign on your favorite bbq restaurant says "real bbq" doesn't mean squat. Remember we live in a world of short cuts and instant gratification. There are a lot (but not all) of places here in the North that boil meat in water and vinegar to break down the fat and loosen the meat from the bone, and then it is kept cold. When you place your order they throw it under the broiler with lots of bbq sauce made with a whole lot of liquid smoke and now you have fake bbq. Yes it can taste good, and a Ford Pinto rides great if you have never even seen a Cadillac. This is just one of many short cuts that can be taken to create what I call an "un-reasonable facsimile thereof." I could and should write a book on fake bbq. But at the same time I say "let them do it. Let them make the fake stuff." Because when somebody like me or you stumbles across "real" bbq we can say "wow" and have that great feeling. So remember we live in a world of "I want it now" people. Some restaurants will go to lengths to make you think you got the real thing. They will have an aroma machine blowing a smell of wood smoke into the air as come through the door. If you notice the rest of the place does not smell like smoke, but just when you walk in. They will even have pictures of their huge bbq pit/oven where customers can see it. But ask yourself where do they keep the wood? Yes no wood pile out back, no bbq. Large commercial pits are fueled by propane or natural gas and wood is added. But I have seen places that have the pit and no wood and still call it bbq. And that’s ok, but it does not taste like mine. Some places have a 20 year old college kid running the pit. And that is fine he needs a job too. But does he know anything about bbq. No it is just his job to put the meat in and take the meat out of an oven. Anybody could do that. Corporate America does not make real bbq. Or you can go 100% idiot proof and buy a Digital "Cook Shack" smoker off eBay that uses some kind of wood pellets or wafers... come on... seriously any stoner can do that.

What is a Brisket? I know some people, know the answer to this but most here in the Northeast are puzzled when they hear "brisket". Most think of Corned Beef. It isn't sold at too many supermarkets. It is a cut of meat from the breast area of the cow. It is a very tough piece of meat if not prepared correctly. It must be cooked slow and low for many hours. This makes it perfect for bbq. Brisket is the choice of bbq in Texas. It is to beef bbq what pork shoulder is to pulled pork bbq. It can be shredded or sliced.

What is "Pulled Pork?" Pulled pork is any pork meat that has been cooked until it can be easily pulled apart with a fork. Sometimes called "shredded" pork. In the South most pork bbq comes from "Pork Butts" or "Boston Butts" which is actually the upper outer part of the front shoulder of the pig. This cut of meat is darker meat and shreds or pulls very easy when cooked low & slow to 185-190 degrees.

Why is ham pink and the roasted pig meat is white? Ham, bacon and other cured meat is pink or red in color because it has been soaked in brine (saltwater) or packed in salt. Smoke will cause meat to turn pink. I sometimes have to convince a skeptical un-knowledge person that despite the pinkish color of the chicken meat it is fully cooked. You know meat is cooked when it falls from the bone or when juices run clear when cut into.

What do you baste your pigs with? Nothing. The skin is to thick to get any spice or marinade to penetrate. So in basting all you are really doing is flavoring the skin. The pig has just enough salt in his skin and the added the taste of wood smoke I think makes it just right. Here again not everybody likes eat pig skin, but those who do love it.

Why Buffalo wings are called Buffalo wings? I know this sound silly to some but here again this is one of those little questions I get asked a lot. They originated in Buffalo New York.

What is Rub? Rub is any spice combo that is put on the raw meat prior to cooking. Some folks put it on hours before cooking and others put it on as it goes into the smoker. I put it on as it goes in the smoker and I do not over saturate the meat with the rub. I want to add flavor to the meat not change the flavor. Rubs are great when "paired" with a bbq sauce. Example: using a rub that may have allspice with a sauce that has allspice hidden in it. Or maybe a rub that has citrus powder in it with a sauce that has lemon juice hidden in it. Or they could be a "rub/sauce" combo that do not have the same ingredients but still complement each other such as a sweeter rub with a tangy sauce. This is the fun of bbq. Trying different things to see what works. I will most times try a first time "exotic" combo on chicken if it fails miserably it is not a great loss, as opposed to a whole brisket and it will happen.

Lean more about the "real" BBQ world at www.kcbs.us